I HEART MY X

How does it mount?

And, of course I have to say, your rig makes my heart go flutter. Absolutely gorgeous.
T

Joined Jan 3, 2018
·
251 Posts
That's badass! I was considering a blackout hood, this serves the purpose and is way more functional

I have a teardrop and am always afraid to leave the fridge on when towing because I don't want to kill the battery when we stop for lunch or something. Also have had an issue with the stock alternator not being able to maintain my AMG battery unless we drive it a lot, so have to throw it on the charger every couple of weeks or she won't start. This would solve both those issues.

Sent from my Pixel 5 using Tapatalk

I HEART MY X

Joined Mar 30, 2020
·
55 Posts
Thanks, I'm almost there with my rig. Still a work in progress. Raptor lining was fun. Anyway. There are basically three components. I realize now I should've taken pics. There is a similar shaped vinyl sheet that you mount to the hood first, then the panel is a 3m tape application. It comes pretty much ready to install. Two man job because the panel is awkward not heavy, you just can't readjust with 3m so I was careful to line it up with blue tape I used as a guide. Then plug and play the controller box and connect to your battery. Trickle charges and has auto shut off. Also will shut off if you run low ensuring you have charge enough to always start your rig. Same company makes the flip up license plate/hawse combination.
If you've done tint, wraps, or vinyl this is super easy, if not it's just easy, lol.

I would use it to charge a battery bank device, not car battery.

Joined Mar 28, 2018
·
459 Posts
I saw those a while back. Do you get the rated performance? Just leery of sticking something permanently to the hood. I’ve been working on a plan to hook solar to a dc to dc charger set up to keep my starting battery full and also charge a custom Lithium iron phosphate battery array in the rear tray.


Sent from my iPhone using Tapatalk 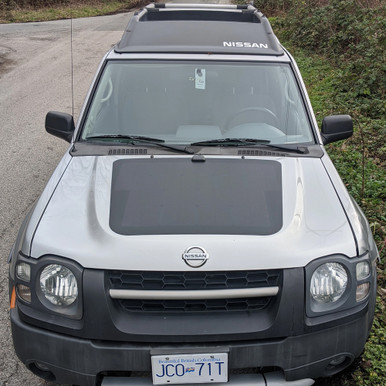 This looks like it was made for Gen1 and happens to fit Gen2 but with Gen2 focus it could fit nicer and have a bit more Watt power. It doesn't seem to fill the whole area before the curved surface.
Dodge RAM versions have 3 pieces that combine, due to curvature. 1 piece is best.
Big plastic bump in the middle on the hood for electronics.

You want to get the +$59 Vinyl footprint that goes underneath, in case this needs to come off in the future (fading, peeling, damage)

I have parked in the full sun of Death Valley for hours (many times), where the solar power collection would help, instead of turning on the engine to power electronics -- but that is not typical to need power while exposed.
When you drive, the car can collect solar power, but then you can get power from alternator to charge the battery bank (still some power banks allow both Solar+DC charging at the same time, so you can recharge faster).
Normally you want to park in the shade, like when I was gone for a couple of days away from car, I would not park in the open just to collect power, it was in the shade of the trees instead (and the small power bank couldn't keep the fridge going).

It looks cool though, so if you put Vinyl wrap (that will fade or peel after as little as a year potentially) on the hood instead, this would look better, and hopefully last many years.

It's not a jump starter or "keep your main battery charged" device as they advertise, I don't think it can collect enough power on "normal days" and do you want to purposely park in the open sun instead of shade? That would keep the inside temp a lot higher, needing more power for your fridge to keep contents cool.

Bottom line, I like the look, I wish it was more Gen2 shaped to maximize the look and Watt power.
If you ever remove it, the area underneath won't be as sun faded as the rest of the hood, showing an imprint.
1 - 9 of 9 Posts
Join the discussion
Continue with Facebook
Continue with Google
or sign up with email
About this Discussion
8 Replies
7 Participants
Last post:
roXterra 15 d ago
Second Generation Nissan Xterra Forums
We’re the best Nissan Xterra forums to talk about your Nissan Xterra Mods and off-road adventures. The New X is the ultimate club Xterra.
Full Forum Listing
Explore Our Forums
General Xterra Powertrain & Driveline For Sale Suspension & Steering Exterior
Recommended Communities